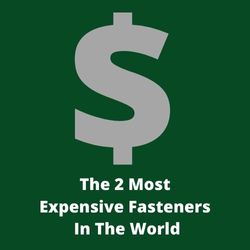 What are the two most expensive fasteners in the world?  You might have one of them on your shelf right now, the other I know you don’t have.  The first most expensive fastener in the world is the wrong one.  I still see enough guys using the wrong fastener or at the very least one that is a poor choice for the job.  For instance, wedge anchors in hollow wall, lead or zamac anchors overhead and the wrong length Tapcon anchors to name just a few.  Usually, they become expensive right away when you try to install and find out they won’t hold and you have to find something that will.  Sometimes, they become very expensive down the line if they fail!  The expense can range from sending a tech to reattach something to much, much worse.  Read up on the Big Dig Ceiling Collapse for some sobering information on what the wrong anchor can cost.  Make sure the anchors you install are correct for the application or they be much more expensive than you thought.

The second most expensive fastener in the world I know you don’t have.  That’s the fastener you don’t have but you need now.  It always amazed how one or two boxes of anchors can bring a multi-million dollar to a screeching halt.  I have driven up to sites with five or six techs sitting on boxes of cable waiting for the fasteners to start the install, because they didn’t have the fasteners needed to work!   Fasteners are such a small percent of the budget that many times they are often overlooked, or assumptions are made of how the install will be done or who is supplying the fasteners.  So now the scramble begins.  We ship many packages each week via UPS air to get the fasteners to a site to keep the job going.  While it’s not my money being spent on the shipping, it still pains me to see cost to ship an item rival the cost of the product itself.  And it can get even more expensive when you find what you need has a lead time or is on a nationwide backorder.  Extra shipping, techs not being able to work and unexpected product delays start making the fastener you don’t have very expensive.

The Takeaway.  So how do you avoid spending money on the two most expensive fasteners in the world.  Know what the right fastener is for the job.  Partner with a supplier that knows the application or is at least willing to do a little research and make sure you are using the right fastener.   Keep a stock on hand or in your guy’s trucks.  Again, not having what you need on hand can get expensive very fast.  And don’t’ just keep the standard items on hand.  If you see a tool or fastener that you think you may need someday, or you could have used on that one job, buy it!  It will be much cheaper now than when you don’t have it.

Find the right fastener for your application at ConstructionFastening.Net

Adhesive anchoring or chemical anchoring has been around for some time. It offers some of the highest strength anchoring available 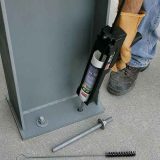 in concrete. It used to be a little tricky to use but products like the Simpson Strongtie AT-XP10 makes it much easier. The AT-XP10 can be used in any good quality 10-ounce caulk tool. The better install tool is the CDT10S that Simpson offers. It has a better ratio and is well built. If you are just going to do a couple installs a good quality caulk gun will work just fine. While the tube looks like a single tube, it is a two-part formula, there is an inner tube that contains the hardener.

Installation is simple. Drill your hole and prepare by blowing the hole, brushing the hole, and then blowing one more time. Just remember blow, brush, blow. Your goal is to knock off the dust and loose particles of the side wall of the hole. Now install the nozzle on the cartridge of AT-XP10. Dispense some of the material until you can see one consistent color. Fill the hole to about 2/3 or so and twist the rod in. You goal is to have the chemical just oozing out of the hole. Once the adhesive fully sets you are good to go. The product comes with one nozzle, which will do the entire tube: IF YOU DON’T STOP! Depending on the temperature, you will have about 4-5 minutes or less before the chemical starts hardening in the nozzle. So, obviously the trick is to get all your holes laid out cleaned and ready to roll before you start.

The video below gives you a nice overview of the product and installation. We have a customer that uses chemical anchoring and routinely uses a 5/8”-11 x 8” 304 stainless steel cut stud in his application. So, we started stocking them for him and now have them on our website if that size fits the bill.

Perma-Grip Concrete Anchors For Fastening Lumber To Masonry Material.  For fastening 2x or other material to concrete, block or brick, you may think of Tapcon screws. Another super easy secure alternative fastener for mounting 2x material or other lumber for that matter is the Perma-Grip Concrete anchor.  We have been selling them here in MN for decades, lot’s of them. They are simple to install.  Just drill a 3/16″ hole about 1″ to an 1-1/2″ past your desired embedment and hammer in.  To determine the correct anchor length, add 3/4″ to an 1″ to your material thickness.  So for a 2 x 4, (1-1/2″) add an inch and you come up with the 2-1/2″ Perma-Grip.  For 3/4″ plywood, you would use a 1-1/2″ etc.  We show lengths of 3″ on our site but they are available much longer so if you are fastening something thicker like foam, we can likely supply the correct length.  It is important to use the correct length for desired pullout and ease of installation.

The most common application we see is any situation where 2x lumber is fastened to concrete.  For large commercial jobs, the 2-1/2″ size is used to fasten 2 x 6 material to the the top of concrete panels.  Perma Grip anchors are also an ideal choice for garage door bucks and window openings.  For multi family structures and basements, you won’t find an easier install than these handy little anchors.  The anchor is covered with an exterior coating making it ok to use with treated lumber and exterior use.

If you are frustrated with Tapcon snapping or stripping (that’s a blog for another day)  Give the Perma Grip anchor a try for fast secure installation. 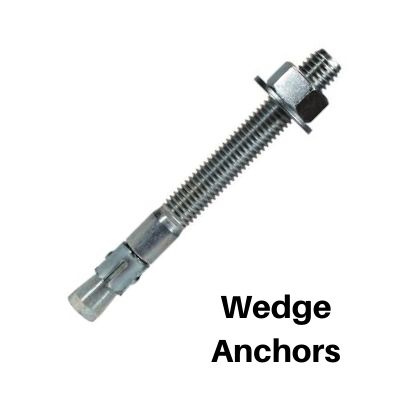 For years the go to fasteners for poured concrete were wedge anchors. They offer fast and relatively fool proof installations.  Wedge anchors are a pretty straight forward install, drill the hole, blow it out, pound in the anchor and tighten.  Your diameter that you drill is the same diameter as the wedge anchor.  For instance, for a ½” wedge anchor you will use a ½” bit.  Drill your hole at least ½” deeper than your intended embedment.  You can drill all the way through the slab if you want in which case if you want to remove the anchor you could remove the nut and pound through.  While diameter as small as ¼” are available, many times a Tapcon concrete screw would make a better choice when you get that small.  Wedge anchors are available in diameters up to 1-1/4” and in standard zinc, mechanically galvanized and stainless steel.

Basics to remember when considering wedge anchors.  Designed for poured concrete, not hollow applications.  Drill bit matches diameter of anchor.  Drill ½” beyond desired embedment. Follow manufacture’s recommended install, usually; drill, clean, pound in and tighten to recommended torque.  Also follow minimum embedment guidelines.  We stock a complete line of wedge anchors in diameters of 1/4″ to 1-1/4″ .  If you don’t see the size you are looking for give us a call we likely have it. Standard finish is zinc but mechanically galvanized and stainless steel wedge anchors are available.

Choosing the correct fastener when fastening to concrete can be much more than preference.  It can be a safety issue.  While some plans or specs may call out a specific fastener, many situations are left up to the contractor to decide what is best.  In most situations, I actually like it when the contractor has some input on what type of fastener to use as I feel when you mix data, experience and the real world, you will always come up with the best fastener.  Certainly when an engineer calls out a certain anchor or fastener, you want to heed the direction.  Many times you will see the note “or proved equal” so you may have a little leeway to choose a different manufacturer than noted.  There are so many applications, conditions, opinions and methods when it comes to fastening to concrete that it can be difficult to know where to start and where to stop for that matter.  Add to that it really depends on the nature of what you are fastening.  So, we will break it down a little bit by anchor type.

Part 1 : Wedge Anchors.For years the go to fasteners for poured concrete were wedge anchors. They offer fast relatively fool proof installations.  Wedge anchors are a pretty straight forward install, drill the hole, blow it out, pound in the anchor and tighten.  Your diameter that you drill is the same ……..CONTINUE READING

Perma-Grip Concrete Anchors For Fastening Lumber To Masonry Material.  For fastening 2x or other material to concrete, block or brick, you may think of Tapcon screws. Another super easy secure alternative fastener for mounting 2x material or other lumber for that matter is the Perma-Grip Concrete anchor.  We have been selling them here in MN for decades,…..CONTINUE READING 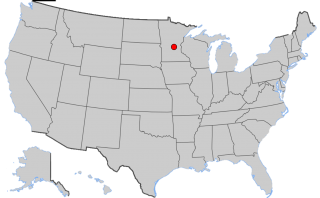